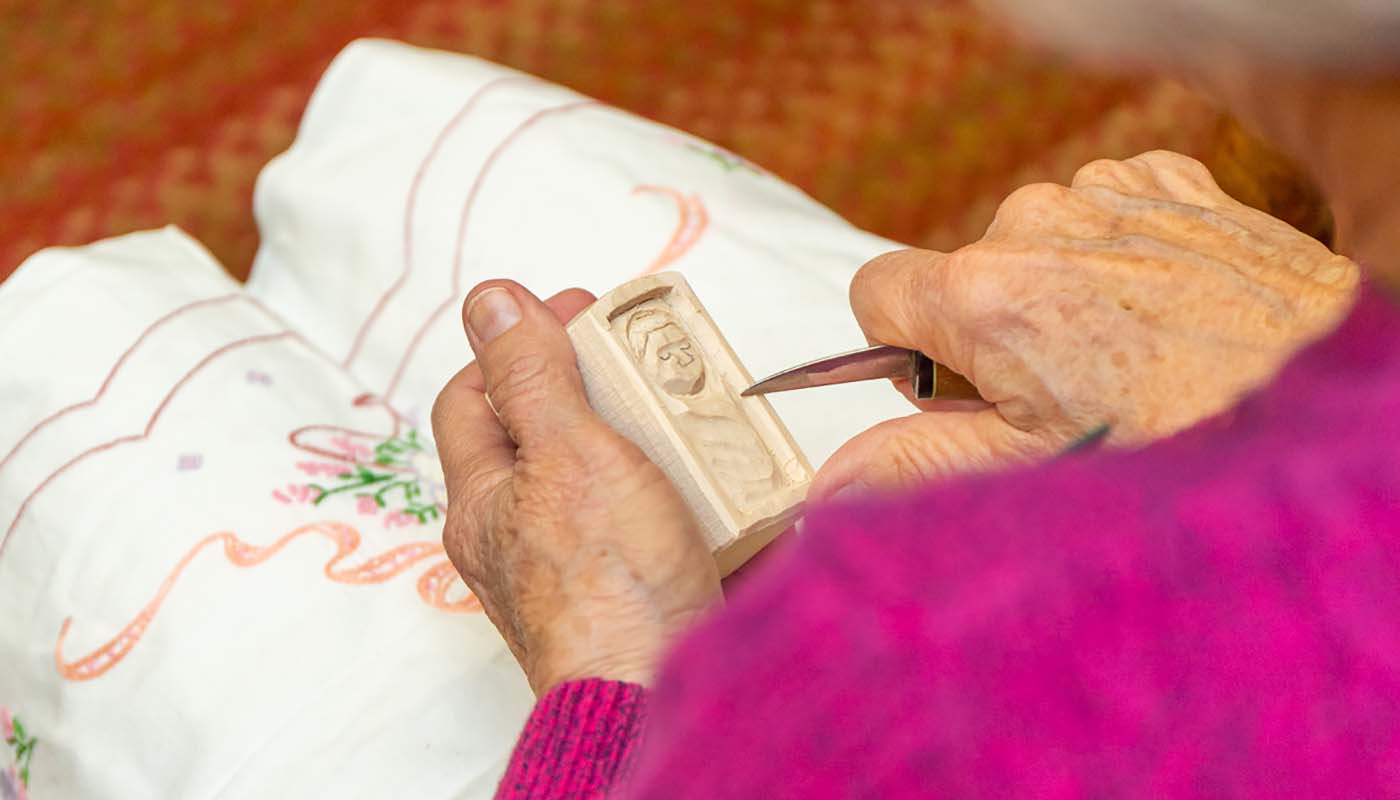 Carolyn Anderson is a long-standing member of the renowned Brasstown Carvers and a member of The Southern Highlands Craft Guild. Carolyn was influenced by family member and Brasstown Carver Ruth Fleming Hawkins. She has also furthered her carvings by studying under fellow Brasstown Carver, Helen Gibson. Carolyn is fond of carving Crèche figures, wooden spool Santa ornaments, and St. Francis of Assisi, which she carves holding a cat or dog in his arms. Always quick with encouragement to new carvers, she possesses a sweet and generous nature and is a genuine embodiment of the Folk School’s values of Joy, Kindness, and Stewardship. We recently sat down at the Folk School to chat about her work and Folk School Holidays past. 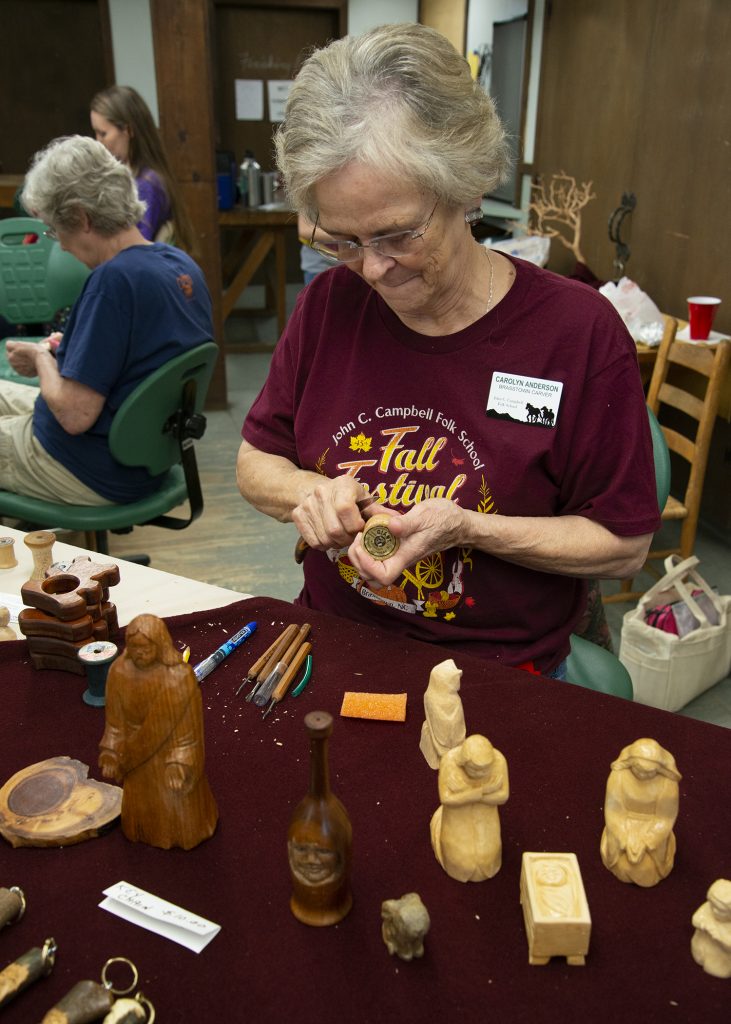 TE: When you were younger, did you go to the kid’s parties for holidays at the Folk School?

CA: I grew up in the Warne section and I was around a lot of the woodcarvers. I could hear them talking about taking their carvings in and everything. I didn’t get to come to any of the Christmas parties until later on. My husband did though. He grew up here in Brasstown, so he would come to a lot of them.

CA:  They would have nights when they would make wreaths and greenery. Everybody would come in and make wreaths. Then we’d do some of the little cutouts for the Christmas tree they’d put up, the little handmade ornaments. Just meeting people, different people, and getting together, everybody happy and drinkin’ cider. We had a lot of fun!

TE: I know you like to carve the basic Crèche figures, Mary, Joseph, the Baby, and Cherubs. Did you get started carving with those figures?

CA: Yes, I did, with Helen (Gibson). She was my first teacher when she was teaching at Tri-County Community College. I did try to carve a little bit by myself earlier on when I was younger, but finally after the boys got into college; I decided I wanted to carve. Mary was the first piece I carved. I liked it, so then I carved ornaments and some of the different animals with the Crèche, but my favorite is probably Mary, Joseph, and the Babe.  I do a lot of the spools, the old antique spools. I carve faces out of them.

TE: How did you get started carving the spools? Was that something that you just had laying around?

CA: One day I thought, well that’d be fun to carve a face on an old antique spool. They’re small and they don’t take a lot of room. A lot of people want to keep it because maybe it’s their grandmother’s or in the family. One time in Asheville, I met a lady, she said she had seventeen spools that her grandmother and her mother had. She was wondering if I would carve faces on ‘em and send ‘em back. She wanted to pass ‘em on down to her family as heirlooms. I said sure, so she sent them to me, I carved them, and she sent me a nice letter on how they all enjoyed it and everything. 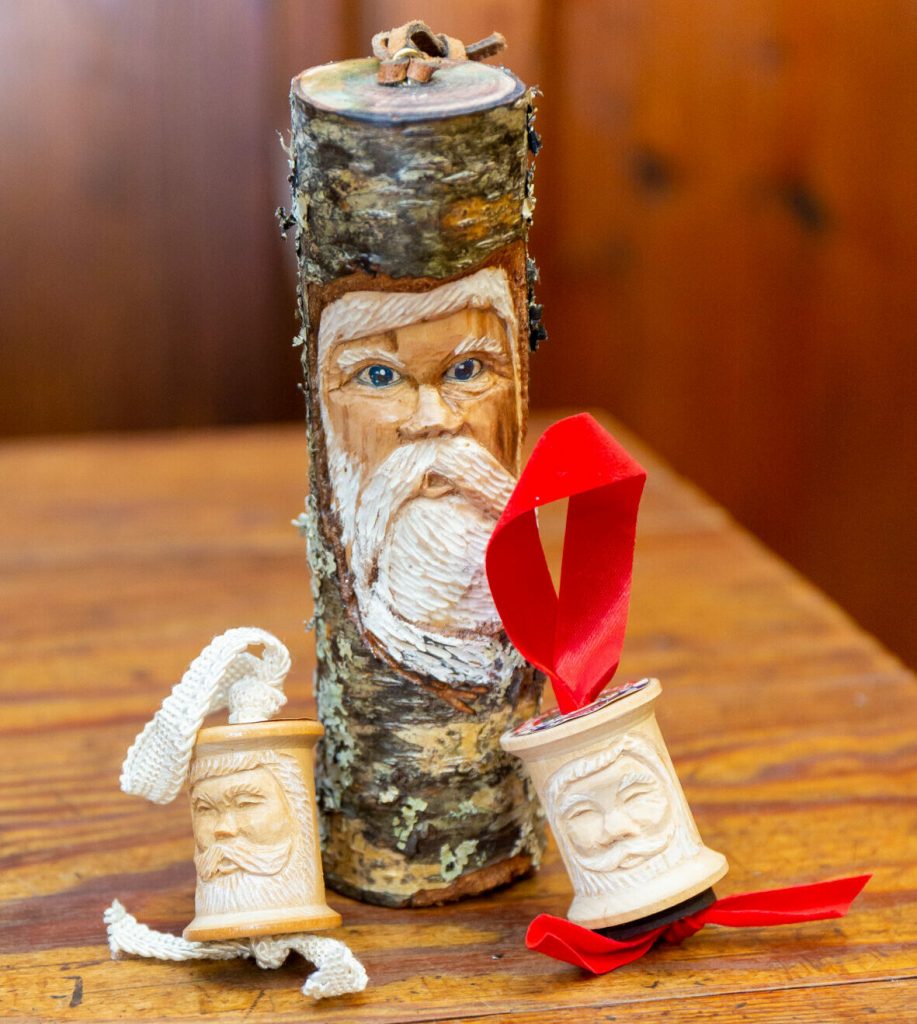 Some of Carolyn’s carved spools

TE: That’s so sweet. It’s interesting talking about those special interactions. What else have you carved for people over the years that has stood out?

CA: I’ve probably carved 30 plus years, and I can’t begin to tell you all the different things I’ve carved.

CA: Well, let’s see. I’ve carved different things for people, like animals for their Crèche and angels. One time I carved a 6” angel with wings. I thought it was pretty good, and it got down to the sanding and I broke the wing. Oh! After all that work! After you break a piece, it’s just not the same. You know that glue’s right there and it just takes away. I wouldn’t sell it, or anything that I broke or had to repair. It’s just not right. But that’s a lot of hours in that, whittlin’ it down.

TE: Absolutely, that’s a lot of hours. Do you give them to family members, or do you have a little shelf at home where you display them?

CA: I do; along with some of the special ones that my husband will say, “That one’s mine. I wanna keep that one!” Then, my son, he likes different things. I carved him a sheep with big horns and a lot of different busts, like a Navy captain. 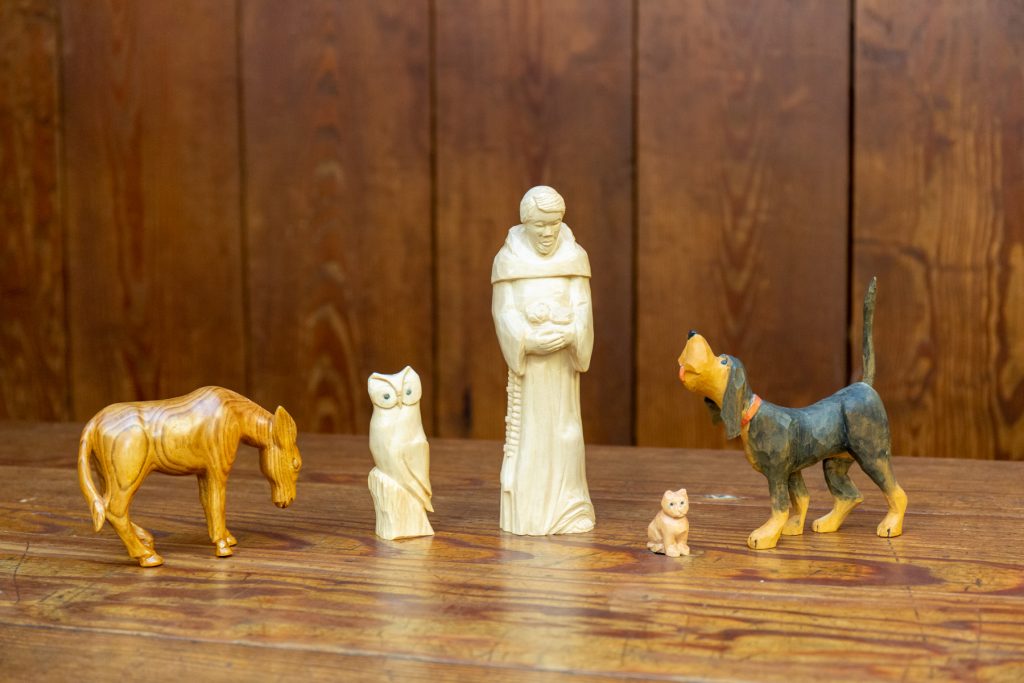 Some of Carolyn’s carvings

TE: I’ve seen you carving some walking sticks too. How did you get into those?

CA: Just, likin’ to carvin’ and I’ve been carvin’ some boxwood. That is really, really hard, but you can get great detail if you carve boxwood. You have to have sharp knives! It’s very pretty wood but boxwood is hard to get too.

TE: Do you have any other woods that you really like to carve with?

CA: Well, holly is really pretty too. It’s white, it’s very hard but I’ve loved carving ornaments out of holly. They’re good for the little thin relief carvings. I don’t like relief carvings usually; I do carvings in the round. I had a cousin, his wife was a carver, her name was Ruth Fleming Hawkins, she’s got a lot of pieces in the History Center on campus. She was really good. I collected hers for years.

CA: Mostly ornaments, angels and little things, she’d get her inspiration from greeting cards and she designed her own. She was good! They didn’t have a TV or anything to distract them. Ruth, she’d sit at this little window that she had and view the surroundings. She’d sit there and carve. I really enjoyed going over there visiting and carving with her.

TE: Yeah, that’s special, to have that time. She’s the one that kind of got you thinking about carving.

CA: Yeah, and years ago, when I was just a small girl really, I wanted to, but I didn’t get into it. It was in the back of my mind that I wanted to learn. I had an uncle who carved. I was a Hall before I married, so a lot of Halls were carvers back in the old days. Helen has been a good influence and she’s been carving since she was 12!

TE: It’s so sweet that you have a friend and mentor like Helen.

CA: Yeah, we still get together on Mondays and carve. We’ve been doing it for years, she’s a good friend and we both enjoy it. It means a lot. 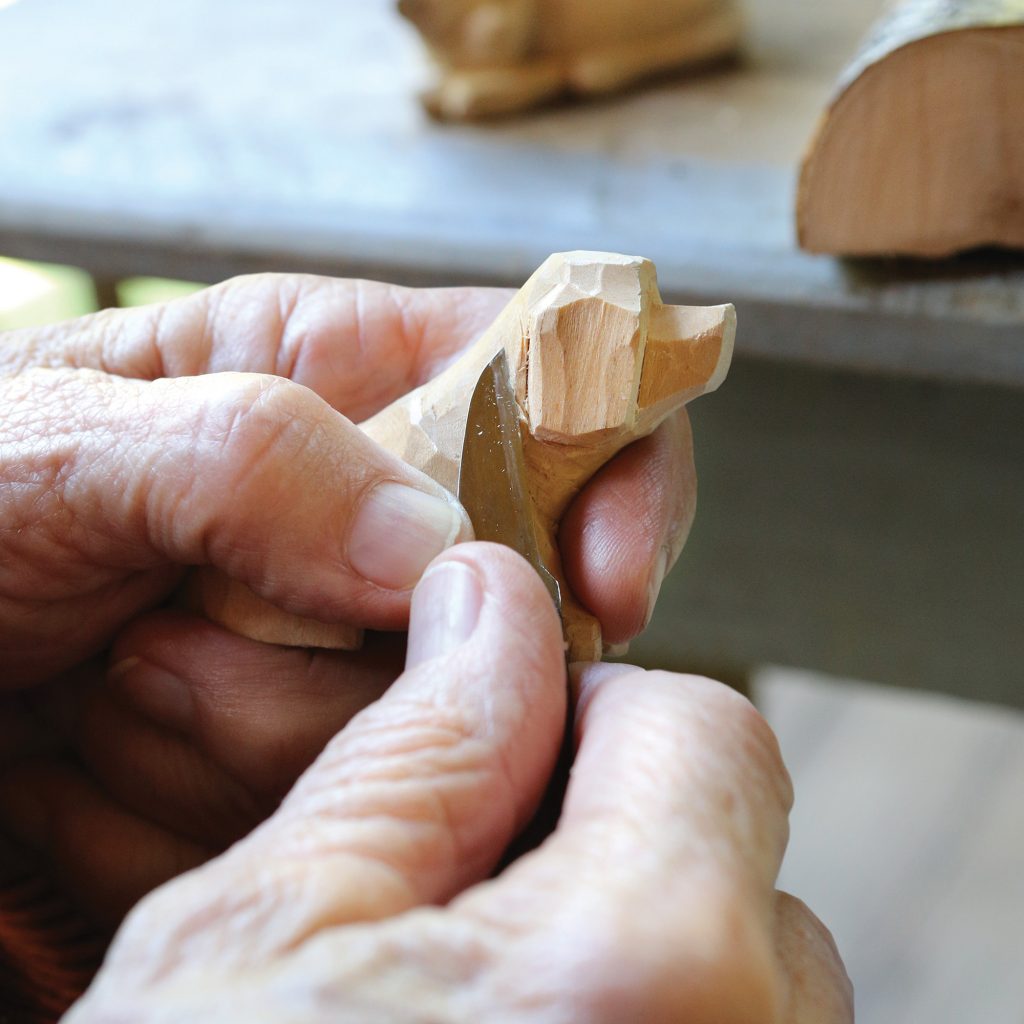 TE: What’s your favorite part of the process of carving? I know you probably don’t like the sanding part of it.

CA: (laughing) I don’t like the sanding. I just like to see it evolving. You know, that’s tough. That’s a good question.

TE: You carve a lot of Mary and Joseph, so you have some favorite figures.

CA: Yeah, and I’ve changed their dress a little bit, to my ideas, so I like to do that.

TE: Do you have an inspiration for the changes in dress?

CA: Yeah, I tried different things, different ways. I put, like, a shawl I guess, on the one figure. The old one was where you could see the arms and mine was where it covered her arms. I just changed little parts that I thought was improved for me. Not to say that any of the others were something wrong with it. 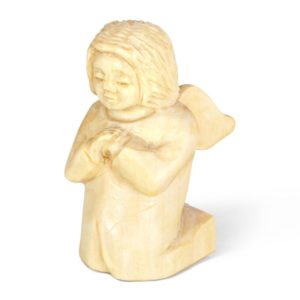 TE: I love that you have the little feet peeking out on the back of the Cherubs. It’s just a sweet detail. Were they always carved like that?

CA: Yeah, I think so, and used to be they’d carve a little boy Cherub. I really need to get some of those carved. I can see the improvement over my carvings after I first started from what I’m doing now. I think you improve over the years by doing it over and over with anything.

TE: Do you have any favorite carvings that other people have made?

CA: Well, I’ve got one or two of Helen’s that I really like. And some old ones of Jack Hall’s dogs with the ribs showing, and some of the older carvers. I’ve got some of Hope Brown’s cats and Glenn Brown’s guineas and line birds.

TE: Do you have any advice for people starting out carving?

CA: Just keep on trying and just enjoy it. Let ‘em know it’s just a piece of wood and if you mess up you can start again on another piece of wood. Don’t give up, just keep on.

CA: Right, and carve it the way you like it. It’s yours. You don’t have to carve it to suit someone else.

TE: Thanks so much for your time, Carolyn!

CA: Nice talkin’ with you. 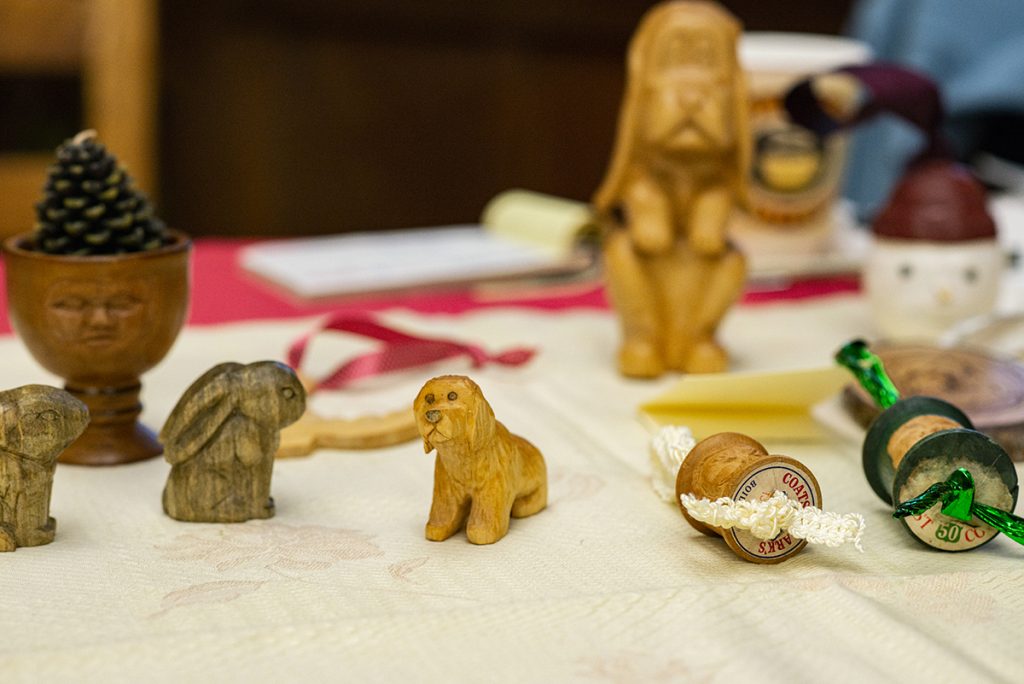 Carolyn’s work from the 2019 Fireside Sale