A Love Letter to the Folk School 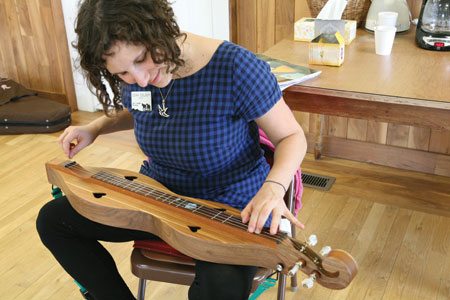 05 Jun A Love Letter to the Folk School

I imagine the change in season, the fireflies aglow in the field. I think of you on Tuesdays at eight and sometimes even sing the Good Night song to myself in hopes that it is synced somehow to the voices encircled in the Community Room. I think of you on Sunday afternoon and try to instill the same excitement, anticipation and promise for my week as exists each week at Student Orientation. I think about you on a nightly basis as I bang my pots and pans with the wooden spoon I carved in Frank Boyd’s “Spoons, Spreaders, & Scoops” fantastic weekend class at the Folk School. Banging pots and pans has become a nightly ritual in solidarity with the current social movement against austerity measures in Quebec.

I wanted to write to say that I miss you everyday, but I also wanted to reflect on the way my learning at the Folk School has manifested one year after my departure from four formative months in Brasstown.

Finding Beauty in the Extraordinary Everyday.

I am sure that there are other folks who relate to this notion of appreciation that comes with an understanding of craftsmanship. It is a feeling of awe. I often catch myself staring at ironwork I never noticed before, thinking about the turns and rests that went into making a croissant, and the precision of a stained glass window. I may have been the world’s worst blacksmith (the crowning achievement of my week at the forge in Paul Garrett’s “Basic Blacksmithing: Good Habits” was a somewhat deformed bottle opener), but I know now what it takes to move metal because I did it with my own hands.

The Solution is Usually Felt, and Sometimes Fiddle Tunes.

These days I find myself working on an acute geriatrics ward as a student Occupational Therapist. Working in an acute care hospital can be overwhelming at times. The pervasive feeling on the ward is one of loss of autonomy, loss of health, and sometimes loss of life. The other day I noticed that one of the patients on the ward who is recovering from pneumonia was lifting up and down a water jug (as if it were a free weight) in an attempt to work on her endurance. I asked her if she’d ever tried felting and assured her that it was a work out that would target the same muscles. The next day we made nuno felted dancing ladies a la Geri Forkner’s Nuno Felting class. She wears her dancing lady on her hospital gown. Mine’s on my nametag (like it was when I was a host). Each Friday afternoon, I bring in my autoharp and play at the bedside for patients and their families, mostly tunes I learned from Work Studies and Brasstown folks around the campfire.  This is the best good that I can do right now.

Questioning the way it is and re-assessing how things could be/ought to be.

A year ago this week, I was halfway through my term as a student host at the John C. Campbell Folk School. I think about the Folk School each and every day with a sense of longing and of love. It’s the feeling of being in a long distance relationship with a place whose rhythm you are in tune with even though you are far away.

My 4 months at the Folk School constituted the first time in my life that I have spent any significant time in a place with a population of less than 1 million people. It made me question many of my assumptions and foregone conclusions about what sustainability means and what constitutes a home and a community. I have never lived somewhere where people build their own houses, make their own ice cream, gather eggs from their own chickens, and operate businesses on the honor system. I don’t usually dance with so many strangers or leave my door unlocked. It is a way of being, a trust, and an acknowledged inter-dependence combined with self-reliance I had never known. I think about it as I bang on my pots and pans exchanging smiles with strangers on the street, and while harvesting lettuce from my modest balcony garden.  I try to incorporate this way of being into each day – in small and significant ways.

So Brasstown, I carry you in my heart until we meet again…