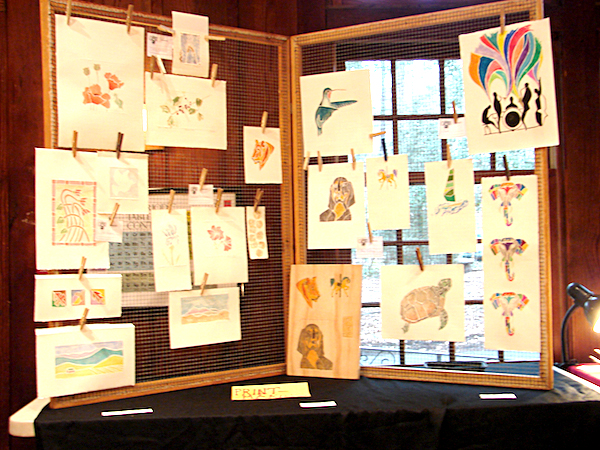 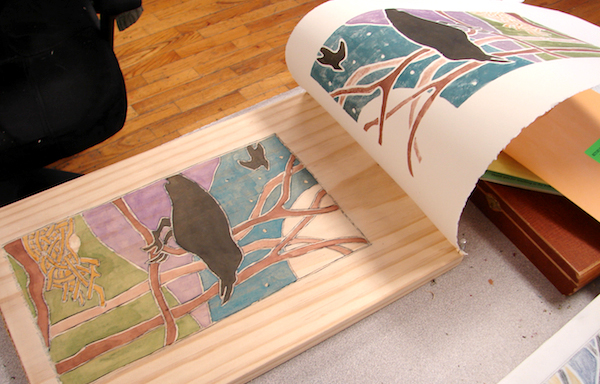 A lot of people think they can’t dance. But then they try contra dancing: they can jump right in as a beginner. The moves are straightforward, and they don’t need any special skills. With practice, they become smoother and learn some extra moves, but the initial learning curve is a mere ripple in the road.

White line printmaking is the contra dance of the art world. I spent last week in Sandy Webster’s printmaking class and enjoyed every minute of it.

I’d chosen the class for many reasons: I like how woodblock prints look, and the class had a low materials cost. I would not have to buy expensive tools and could use my old watercolor set. As I had hoped, the technique proved to be one that I can easily continue to do at home, even without a studio space. 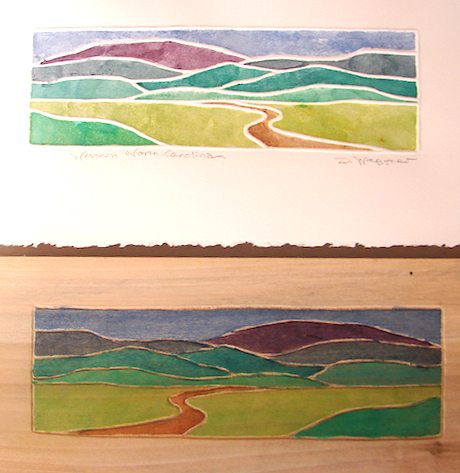 Also known as Provincetown printmaking, white line printmaking began in 1914 as an alternative to Japanese printmaking in which each color of the print has its own woodblock. American printmakers carved an entire design into one block, using the carved lines to separate areas that would have different colors. (The carved lines end up white in the final print, giving the technique its name.) Instead of rolling ink over the entire woodblock, the printmaker paints one area at a time, resulting in a multicolored print.

My classmates began drawing flowers, birds, and teacups. Some went for a realistic look, while others chose a highly stylized approach with which white line printmaking works well. Sandy showed examples of prints we could make if we had no drawing skills: a few curved horizontal lines created a convincing mountain landscape, and a square with X’s and O’s cut into it was printed multiple times onto one paper to create a quilt-like pattern. 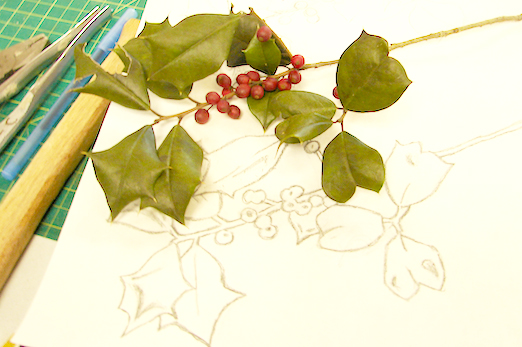 We reduced our pictures to simple line drawings and traced them onto our wood boards. Using a larger sized board made carving easier and reduced the chance of accidents. We used linoleum-carving tools to chisel away our images. Going with the grain of the board was easy, but going across the grain required a lot of patience. 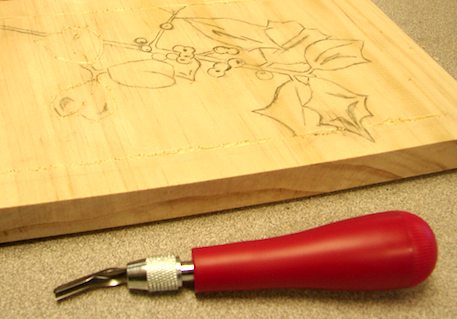 Holly Board and Carving Tool

Once the image was carved, we pinned a sheet of paper to our board so that it could flip up and down, hitting the same place each time. Then we began applying watercolor. The paint soaked into the board, so a wooden dowel was used to rub the paper (a flexible printmaking paper) and transfer the paint. Watercolors had always seemed like a “one shot deal” to me: if you made a wrong stroke, there was no going back. With a wooden board, however, the first rubbing only produced a faint, mottled color. Each subsequent rubbing produced a more opaque result, so that the printmaker could build layers of color without stress. The carved lines contained the paint, making it easy to create the proper image. Sandy also taught us a trick of using dish soap on our boards to make the color transfer more easily. 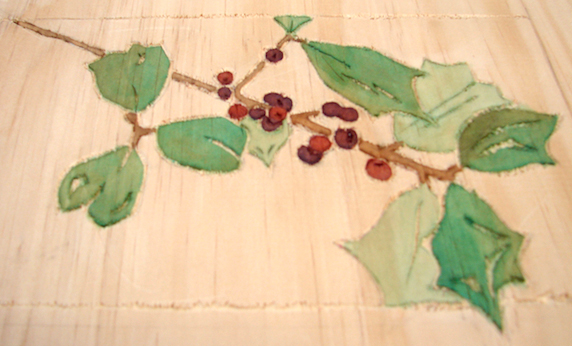 Holly Board, After Painting

By the end of the first day, every student in the class had created a print, and we had the rest of the week to explore campus for inspiration, sketch and create images, and bring them to life with our woodblocks. It was an ideal vacation. 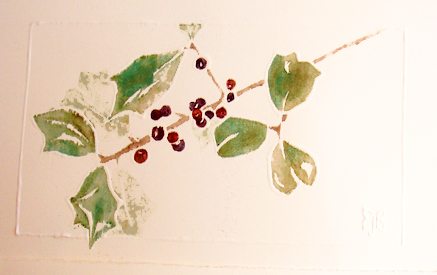 Sandy Webster the instuctor of Emily’s class “White-line Printmaking,” has taught workshops for the past 30 years and has lectured on basketry and fiber-related subjects in the U.S., Canada, Australia, and New Zealand.  Her students are encouraged to experiment and try all the possibilities while learning the basics of technique, design, and color. Sandy has a BFA, an MFA, and recently authored the book, “Earthen Pigments: Hand-gathering and Using Natural Colors in Art.” Visit Sandy’s website

Emily Buehler, the author of this blog, is also an instructor of Bread Making at the Folk School. She became a bread baker in 2001, intending to take a break after finishing a degree in chemistry. Six months later she began teaching bread classes. Emily has written a book on bread making – techniques, not recipes – that includes a section on the science occurring in the dough. (Chemistry does come in handy!)  Visit Emily’s website

Emily will be teaching her popular bread making class in June:
The Science of Bread June 1 – 7, 2014