Working Under the Star – Part III 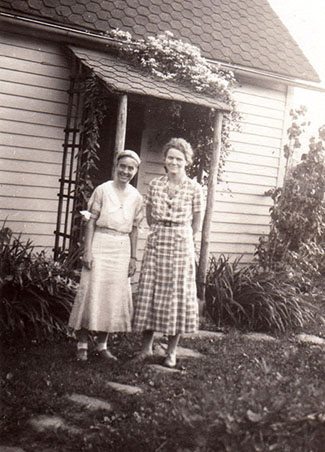 Posted at 00:30h in From the Archives, Stories: Blacksmithing by Rooney Floyd

In researching Part II to learn more about the AFSC people and their work camp life, I discovered other unexpected AFSC connections to the Folk School.  Primarily, two of our well known and long serving staff members came to work at the school as a result of their AFSC affiliation.

Louise Pitman came to the School as an AFSC volunteer in 1928, and worked in the craft department.  Louise was born in Orange, New Jersey and graduated from Columbia University in New York.  She then became interested in the Quaker approach of finding peaceful ways to help the people of the world.  She received a list of places and projects where help had been requested.  On the list was the John C. Campbell Folk School.  She wrote to the School, and several others on the list, expressing interest. Marguerite Butler replied and set up an interview at The Russell Sage Foundation in New York.  Marguerite was persuasive and Louise decided to go to the Folk School for one winter.

When her work began, there was much to do and it was so interesting to her, she forgot about that “one winter”.  Soon, she was put in charge of the Craft Department although she had no experience in crafts.  Her craft opportunity developed when Wilmer Stone, later Viner, came to the School to lead a workshop in vegetable dyeing.  As Louise later said, “it fell to her to learn this craft” in order to ensure high quality dyed wool to supply the School’s weaving program.  Like everything else Louise undertook, the native vegetable dyeing program was outstanding.  The School’s weavings became famous for their lovely, soft colors.   Perhaps best of all, Louise produced extensive notes, with actual samples attached, to fully document and record the dyeing process, thus preserving the precious heritage of vegetable dyeing of wool.  Louise skillfully managed the entire craft department for 17 years increasing profit steadily, as well as heading up the renowned vegetable dyeing craft.

In 1945, she left the School to return to New Jersey to care for her mother and later, her father as well.  The Southern Highlands Craft Guild recruited her in 1951 to return to North Carolina to be the Director of the Guild.  Having been a member of the Guild and on the Board of Directors, she happily accepted the offer and served as Director for ten years.  When she started the job, the Guild was still small and scattered.  When she retired, it was a large, growing, united organization, known everywhere for its fine work.  Louise was always grateful for her association with the Folk School as she said, “where it all began”.

Anyone who knows anything at all about the Folk School immediately recognizes Louise Pitman’s name and probably would rank her as the number three lady behind the great institution.  Conversely, I have found no one who knew she came here as an AFSC volunteer…

The most recent AFSC alumnus to work at the Folk School came in 1991 to take the job of Coordinator of Music and Dance.  (He just retired two weeks ago.) 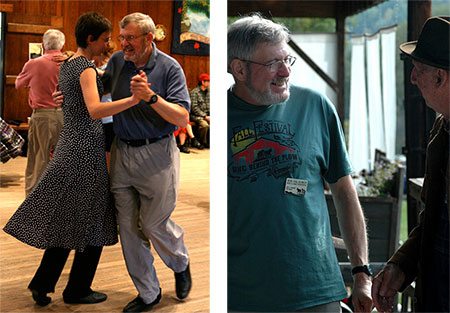 At supper one night last year, while I was working on the replacement star for the blacksmith shop, I sat by Bob, and as we discussed my work, he shared his AFSC connection with me and he graciously agreed to an interview.  Bob grew up in a Quaker community in Baltimore Maryland and went to the Baltimore Friends School. After earning a B. A. degree in Russian from Wesleyan University in Connecticut, he taught Russian and French at the Friends School for several years.  He then attended law school at the University of Maryland and also became involved as an AFSC volunteer, primarily in draft counseling during the Viet Nam War Era.  During this time in 1969, he was invited by friends to go down to Berea College in Kentucky for a mountain folk dance weekend.  Although Bob played some folk music in a group, he declined the invitation at first.  (If truth be known, perhaps he felt folk dancing was a little less than sophisticated.)  But when told there would be plenty of girls down there, he decided to go along.  When he ventured out on the floor to try mountain folk dancing, he actually didn’t mind it too much.  Thus, unbeknownst to him, he had begun his life’s career.  Just another result of the Hand of the Lord.

Bob first learned of the Campbell Folk School at Berea when he shared a room with Jim Morrison who had been at the Folk School for about a year then.  He also met Ann Culbertson and John Ramsay, who was the Director of the Folk School.  John invited Bob to visit the School.  The next spring, Bob accepted John’s invitation and spent a brief time at the Folk School where he worked in the dairy.

After twenty years of various assignments and associations with music and dance organizations in the north east, Bob’s reputation had risen to the top of the professional ranks for his leadership and ability.  It was then that he accepted the job at the Folk School.  He took the School programs to new heights and was ultimately recognized with the Country Dance Association’s prestigious Life Time Achievement Award in 2011, one of only a few to receive it during his lifetime.

In the process of interviewing Bob, I realized had it not been for that first trip to Berea, we would not know him today.  Beyond that, however, David Brose had just shown me the Folk School Newsletter #16 dated December, 1933.  In it, Marguerite had included a letter from the Berea staff thanking her and the School for bring the “singing games”, as she called folk dancing, to Berea.  The letter stated, “The seed you have sown is bearing rich fruit.  In some dances we have had 60-75 participants.  I would say that Berea is thoroughly inoculated now.”  Georg and Marguerite, with community and student dancers had been asked to come and help start a similar program to the Folk School’s at Berea.  In 1933, this idea of the Folk School taking the dancing program to Berea was well known but has long since been lost to modern generations, especially since Berea’s Mountain Folk Festival, begun in 1936, celebrated its 75th anniversary in 2011.  Bob Dalsemer will take the Brasstown contingent over to Berea next week, as he has for many years, for the 77th festival.

I visualize this great circle of a well designed folk music and dance program at the Folk School going to Berea where it proliferated and many years later, drew Bob to his life work.  Eventually he landed at the Folk School where he received the field’s highest award.  To keep the momentum going, he returns Brasstown dancers to Berea each year as they have for over 80 years.

As with Louise, Bob’s work at the School is well known to all, but again, I have found no one who knew that his AFSC connection is what ultimately brought him to us.  There are even more AFSC connections.  Sunday night at supper I made a new friend, Jeff Sebens, who is teaching the hammer dulcimer class, and learned that he has served as an AFSC board member.  Later in the week, I learned that David Liden did a summer volunteer assignment with the AFSC in Italy when he was only 18.

Continue on to Part IV