Working Under the Star- Part I 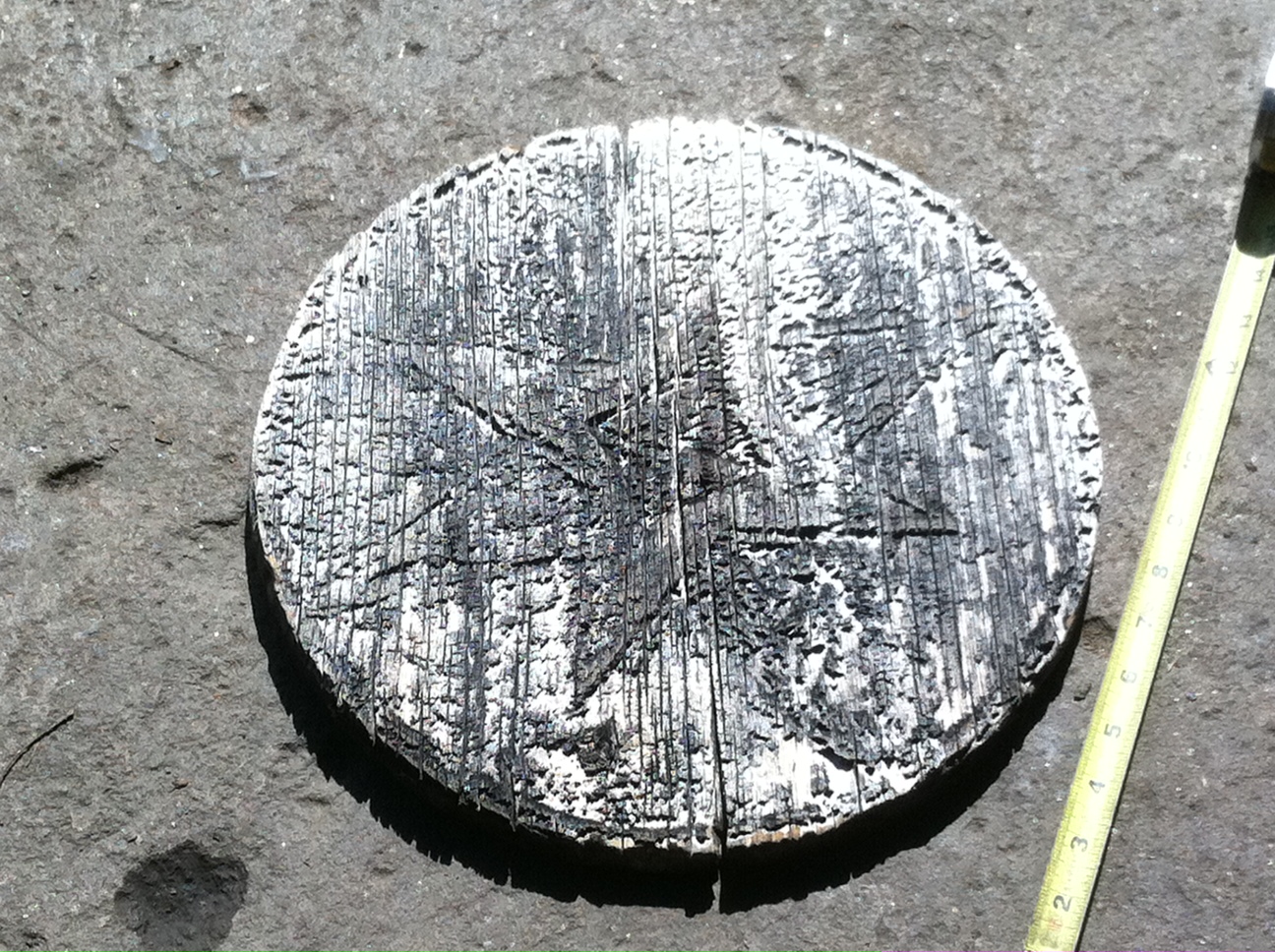 08 Apr Working Under the Star- Part I

Posted at 09:36h in From the Archives, Stories: Blacksmithing by Rooney Floyd 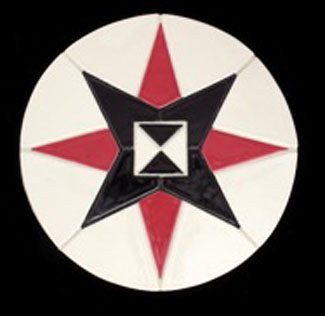 Part I of a III Part Series

During Blacksmith Work Week in March of 2012, we were replacing an old gable vent on the south side of the Oscar Cantrell Shop, now the shop of resident blacksmith, Paul Garrett. To remove the existing vent, a ladder was placed right in front of the old weathered, wooden star medallion installed in the stone wall when it was built in 1946. 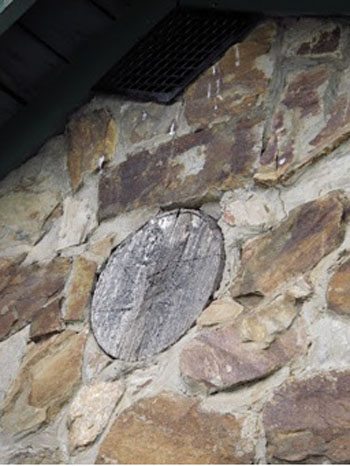 Original emblem waiting to be restored 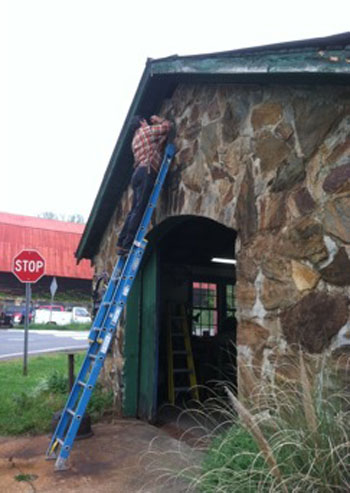 Taking down the original emblem

I noticed the medallion many times over the years as the original painted colors faded away on the eight-pointed star and wondered about its meaning.

We decided to take it down and attempt to restore it. Examination showed the 14 inch disc, made from yellow poplar boards, to be beyond repair. 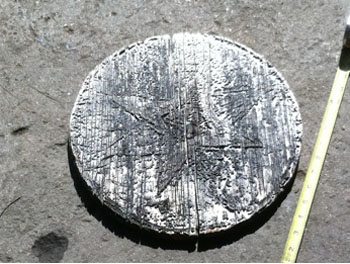 Even though we didn’t know what it represented yet, we knew it had to be replaced since it had been important enough for a hole in the stone wall to be formed to hold it. Consideration was given to carving a wooden replacement or forging a steel one. In both cases, maintenance against future weathering would be considerable. Fellow worker, Steve Barringer, suggested a ceramic piece; and the solution was in hand. A glazed, ceramic medallion in a stone wall would hold its color and last indefinitely. With that much of the planning out of the way, we finished out the week working on other jobs to help improve the blacksmith facility. At lunch one day, Jan Davidson told me that the star was the logo of the American Friends Service Committee (AFSC), who built the shop in 1946, and that they are still in business today.

Over the next few months, a most heart warming experience unfolded and I will attempt to relate it in this and the next two parts of this blog. Part I is the replacement of the old logo with a striking new one. Part II answers who these AFSC people were anyway, and why the logo was placed on the building in the first place. Finally, Part III will reveal that two of our most celebrated staff members at the Folk School, came to us fortuitously as a direct result of their association with the AFSC.

The AFSC website provided a detailed, color picture of the logo, its history, and a description of the Service Committee mission, or as they refer to it, “Working Under the Star”.  From this information, a full scale drawing of the logo was made.

For ceramic tile, where better to look than world-class Bella Vista Tile in Brasstown? Owners, Lisa TeviaClark and Jim Clark responded enthusiastically to the request for help and suggested the medallion be a mosaic rather than a single, large tile.

Actual work took place during Dance Musicians Week in July. The Clarks fired numerous test pieces to determine shrinkage rates for the different shaped clay tiles and to produce the proper shades of color from the glaze. While this work was being done, John Campbell of the School Maintenance Department helped me prepare the wall for the new logo. All of the School’s scaffolding was being used at a project at the woodshop, so we clamped walk boards to the pipe rack on top of his old truck. This bit of “Appalachian Engineering” provided a perfect working height, if not meeting code. 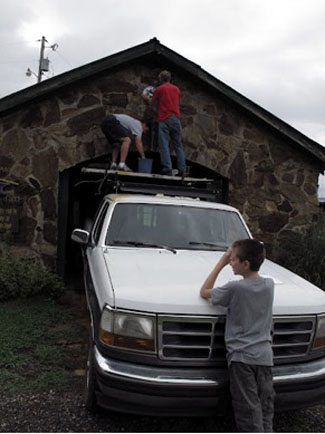 Here’s the scaffolding that we used to install the plaque, complete with Elienne, our photographer

After the wall preparation was complete, Lisa and Jim delivered the mosaic piece permanently mounted on cement board ready for installation. The piece was marvelous! Everyone was eager to see it returned to the shop gable where the original one had been proudly placed by the AFSC work crew over 66 years ago. 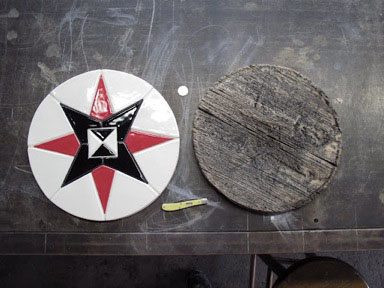 Here are the new and old emblems side by side

Jim helped me install the piece in between summer showers. After an application of grout, the medallion was pressed into place. 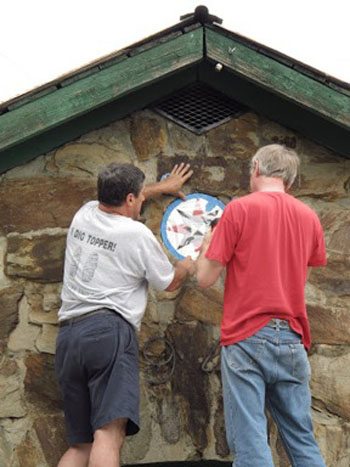 Lisa provided critical guidance from the street level to make sure the orientation was correct and finally the hand level assured it was plumb. 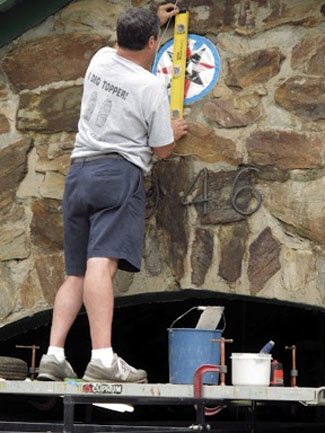 The installed piece was then expertly secured with a make-shift wall clamp using one of Paul’s old rubber tires. Don’t laugh, it worked. 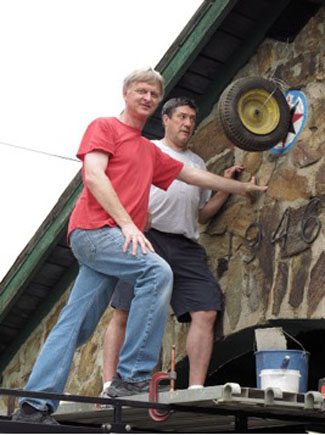 Wall clamp that holds the emblem while it sets

After cleaning up and critical re-checking, final pictures were taken by Elienne. 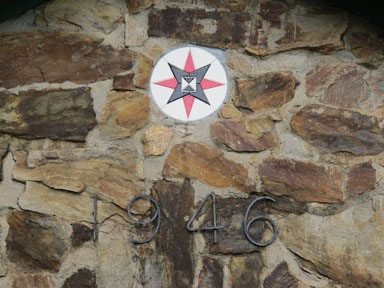 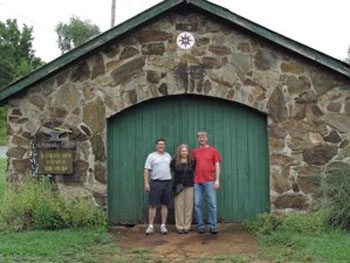 Rooney, Lisa and Jim with the finished emblem