What Exactly is Blacksmith Work Week? 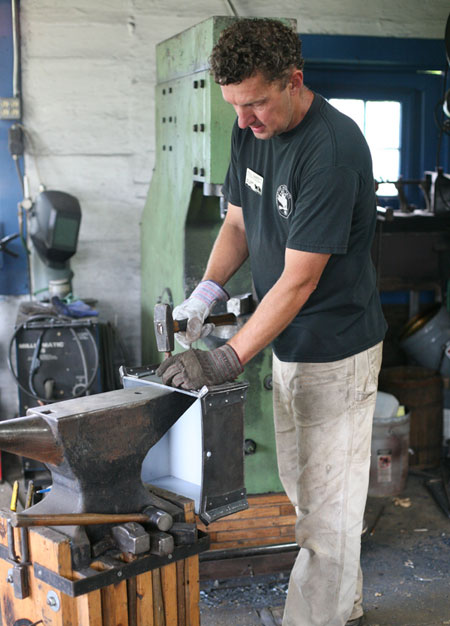 I sat down with Paul Garrett, the Folk School’s resident blacksmith, to find out a little bit more about the mysterious and unique annual event known as Blacksmith Work Week. 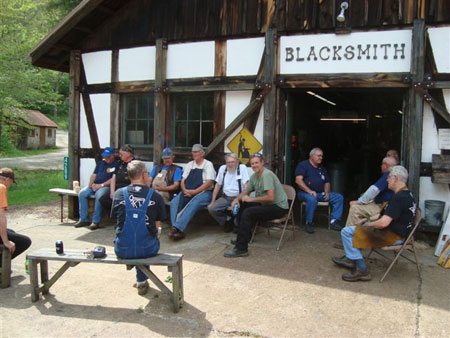 CP: So what exactly is Blacksmith Work Week? I imagine a group blacksmiths who are old buddies hanging out in the Shop and making lots of cool things, is that that accurate?

PG: It is and it isn’t. While many of the people who come to Work Week have been coming for years and the sense of camaraderie is high, the week is really about doing what needs to get done around the Shop and the Folk School campus. This involves forging pieces on the anvil, but it also includes tool and equipment maintenance, electrical work, woodworking, fabrication, and installation. Folks don’t realize that some of the people who come to work are not only blacksmiths, but other specialized technicians helping to keep the Shop running smoothly. With a large group of people focusing for one week on tasks at hand, we get many jobs done that would never get done otherwise… it’s almost 900 hours of volunteer labor condensed into one week. It’s pretty incredible! It’s a lot of fun, but also a lot of work. 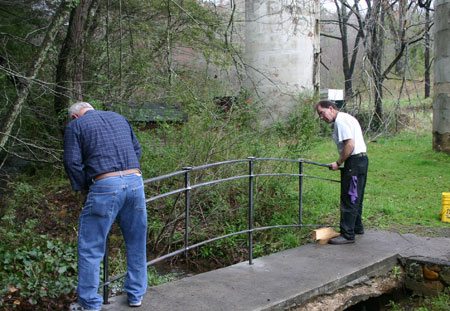 Installing the Bridge Railing by the Shop (2006)

CP: How does a person become involved in Blacksmith Work Week?
PG: The generosity of volunteers never ceases to amaze me and many people have approached us about volunteering. Blacksmith Work Week is by invitation only and we choose people based on tenure and the types of projects we have lined up. It is not difficult to find a solid team of blacksmiths for the week, what is hard is turning folks away who want to help as our space and time is limited. I feel lucky that so many folks want to help!

CP: What projects did you focus on during Work Week 2012?
PG: Besides routine Shop maintenance, specific projects we focused on this year were the refurbishment of the Frances Whitaker sign, continued work on the new Clay Spencer Shop sign, the completion of the handrail in the upstairs of the Shop, brackets and signage for trails and buildings around campus, repairs to the Cantrell Shop, and a gate for the campground. 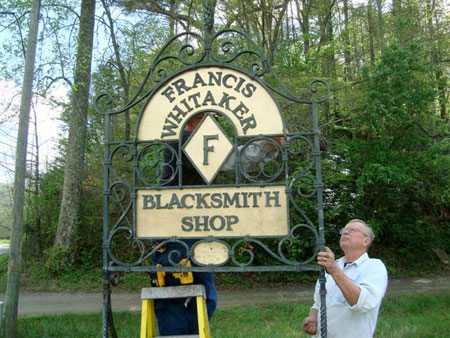 CP: What projects stick out in your mind from past years?

PG: The Clay Spencer Blacksmith Shop opened on July 18, 2010. Up until that point, much labor and effort went into the construction and design of the new shop. The Work Weeks up to the grand opening of the new shop focused on making it happen; we even had additional mini-work weeks to get the job done. For example, during Work Week 2009, we assisted the Timber Framer’s Guild with support pieces like post bases, brackets, and tools as they built the foundation for the new Shop.  If you look at the 16 post bases in the Shop every one is custom decorated differently; this reflects how individual blacksmiths can add their own design touch to a collective project.

When you walk around campus and see major pieces of ironwork, chances are they were completed during a Work Week. Specific pieces I can recall include the dining hall chandeliers, the red railing, and the bell tower. The copper roof on the gazebo in the vegetable garden was another Work Week project. 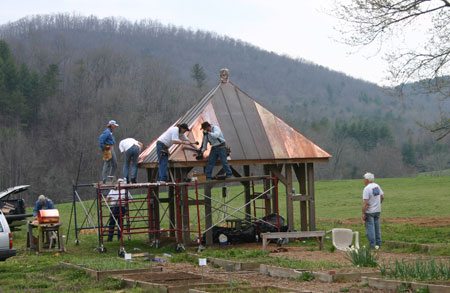 Installing the Copper Roof on the Gazebo (2006) 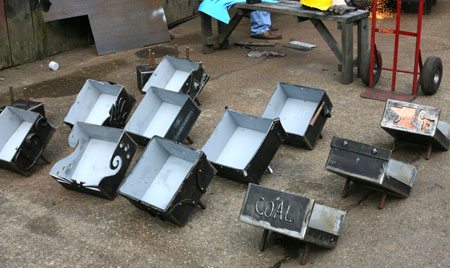 CP: How many people attended and who traveled the furthest?
PG: 18 people participated this year. Kevin Foster came all the way from Talkeetna, Alaska. He was able to donate a week of his time and travel so far because we scheduled his class, “Blacksmithing Techniques, with a Twist,” the week following Work Week. Many of the participants in Work Week are also instructors throughout the year.

CP: Who has been attending Work Week the longest and most consistently?
PG: Clay Spencer. He started Work Week in the late 80s and has been to every one since, that I can remember. When I was a student at the Folk School, I remember asking Clay if I could help during Work Week and his answer was “no!” That shows how competitive it is to participate – and look, now years later I am running the week! 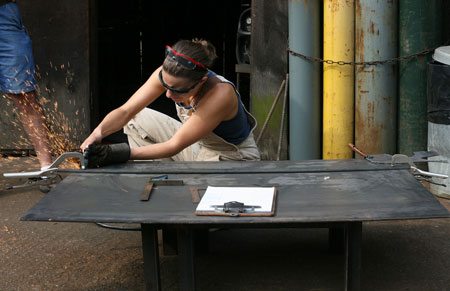 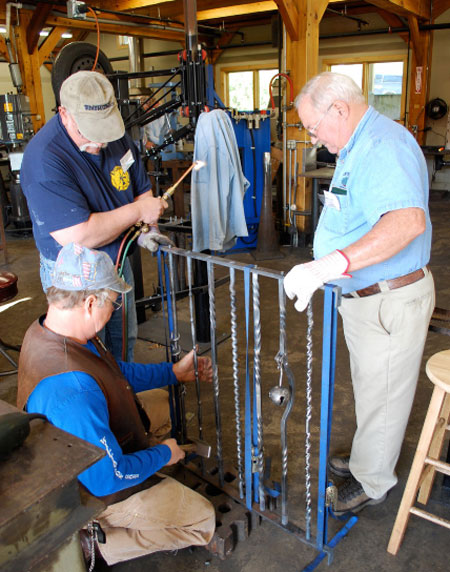 Working on the Railing for the Upstairs in the Shop (2011) 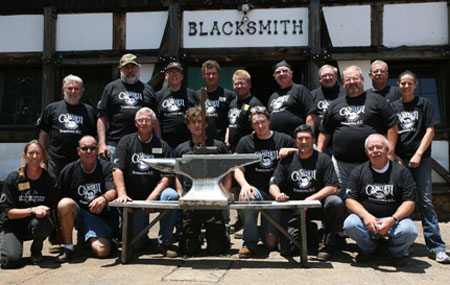 CP: Does the dining hall need to stock up on a lot more food?
PG: Meat.

CP: What is the preferred meal of Work Week?
PG: Meat.

CP: So not many vegans at Work Week?
PG: Meat. 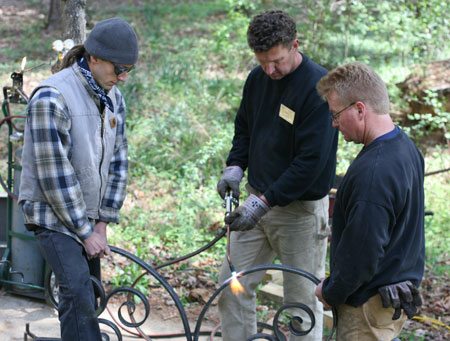 Installing the Railing by Bidstrup (2007) 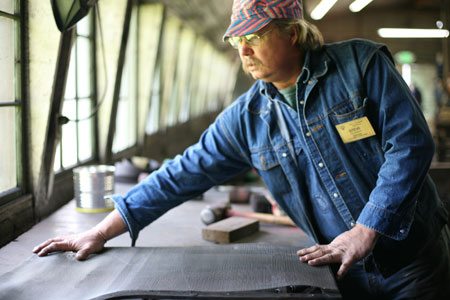 Steve Williamson Working on a Fire Screen for Keith House (2007)

CP: Has the opening of the Clay Spencer Shop enabled participants in Work Week to do different types of projects that they were originally unable to do?

PG: Absolutely! Now that the new Shop is where the forging is done, it has opened up the previous space, the Francis Whitaker Blacksmith Shop, to be transformed in a workshop with more equipment for welding, cutting, fabricating, and other various contemporary metalsmithing techniques. There are still two functional coal forges in the Whitaker Shop to pay homage to it’s history as the original Blacksmith Shop. Having both Shops open for business has definitely expanded the possibilities of projects at the Folk School, not just during Work Week, but every week.