A Week of Puppetry at the Folk School 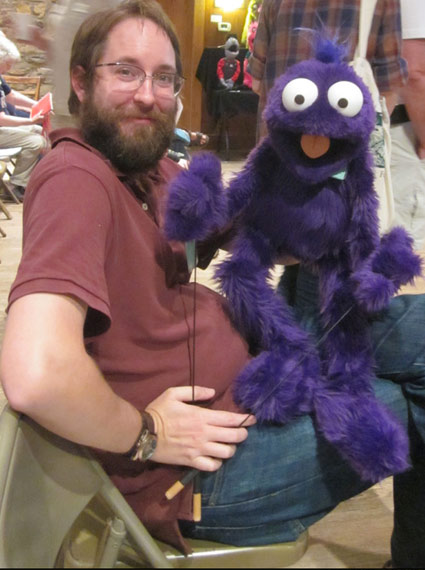 29 Aug A Week of Puppetry at the Folk School

The Folk School catalog offers a class category titled “Unique Offerings” and this year I was lucky enough to be there when a Unique Offering class, “Hand-and-Rod Puppet Construction” was in session. Teacher David Stevens taught this class with his purple assistant, Lobert. David was funny, but with Lobert he was hilarious. He’s also a great banjo player and singer.

The Folk School offers entertainment each evening at 7pm. On Wednesday evening, David and Lobert presented a puppet show for anyone who wanted to attend. David and the puppets performed several skits and they were FUNNY. Though focused toward children, the adults laughed and enjoyed the show, perhaps even more, than the children. 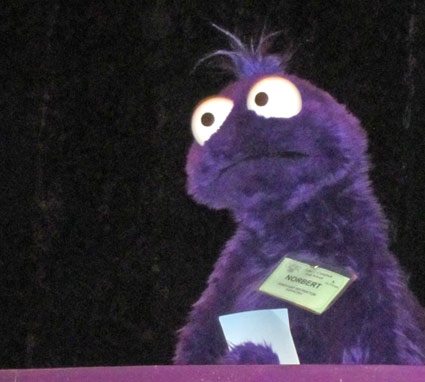 Lobert is actually making announcements here and one of the announcements was to not take photos during the performance. Oops! I already had this one taken before he made that announcement. 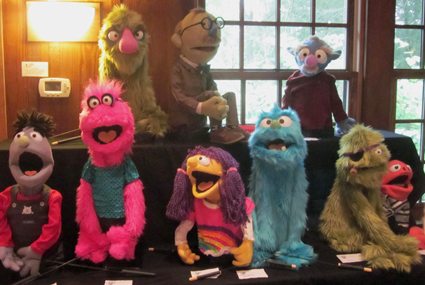 During Show and Tell on Friday, all the classes display their projects made during the week. I believe the top row of puppets are David’s and the ones on the bottom are student’s work. I was amazed to see two finished puppets for each student. This class had only three students, but I have a feeling that if it’s offered again there will be many more students. Me for one! 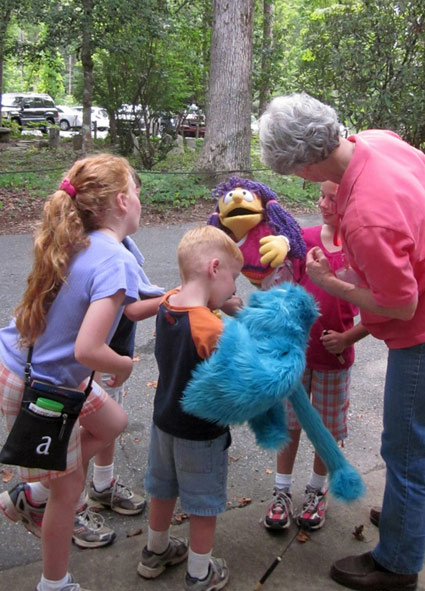 One of the students got way-laid, by these children, on her way to Show and Tell.

I can see a wonderful use for these puppets. Perhaps to a child psychologist, a children’s ministry, a special education teacher, a librarian or just for someone to have fun with. David carries his puppet theater all over the US. He specializes in presentations to libraries and schools. If you are interested in getting in touch with him go to his website All Hands Productions.

Marilyn Wall is a fiber artist and Folk School instructor who lectures and teaches in the Southeast. She has exhibited her work both regionally and nationally and was commissioned to design and construct a wall hanging as a permanent installation at South Carolina Botanical Gardens in Clemson, SC.