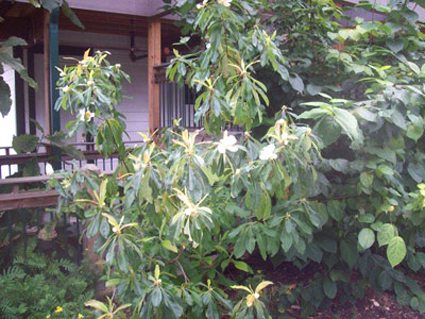 Posted at 15:18h in Stories: Gardening & Homesteading by bbdg_pj

The Folk School has been making efforts to use native plants in our landscapes and there is a very interesting one in bloom right now at the Field House. Franklinia alatamaha, or the Franklin Tree, is a rare shrub or small tree of the Tea Family which was discovered in Georgia in the 1700’s by naturalists John and William Bartram. They brought specimen seeds and plants back to Philadelphia where it was propagated and named in honor of the Bartrams’ friend Benjamin Franklin. However, the Franklinia has never again been found in the wild (since 1803) and the remaining plants are descendants of the Bartrams’ collected specimens.

Franklinia Tree Outside of Field House

Franklinia has large striking flowers and the tree at the Field House is in full bloom this month. It was planted in a deep bed with good drainage adjoining the front parking area and it seems to be happy there. The Franklinia and the other native plants used in the Field House landscaping were supplied by friends of the Folk School Johnny and Pam Strawn of Hanging Dog Valley Nursery. 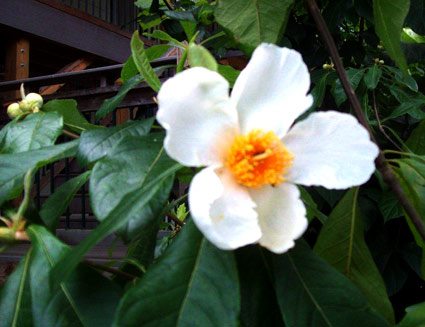 Franklinia Bloom Outside of Field House

FUN FACT: In 1969 a set of four U.S. postal stamps was issued, each bearing a plant associated with one of the four regions of the country. Franklinia was chosen to represent the South (www.georgiaencyclopedia.org). 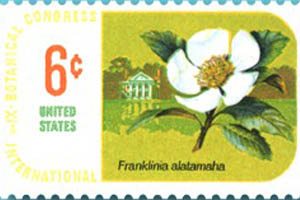