Learning Guitar at the Folk School 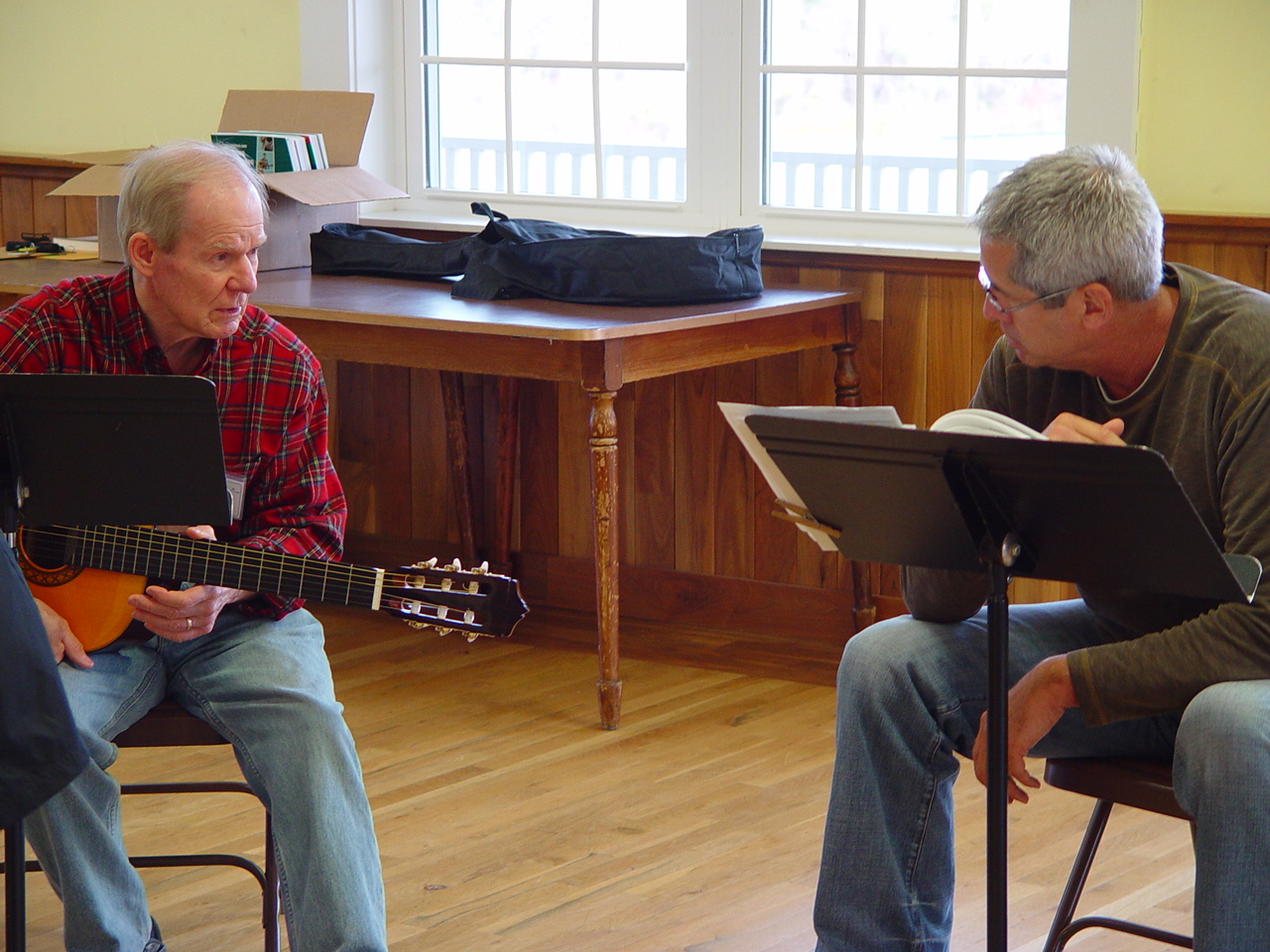 “What was I thinking?” passed through my mind several times last week while I sat in “Intro Guitar” class at the Folk School. In other studios, I imagined, students happily wove Shaker rugs or rolled polymer clay into intricate beads. Why had I signed up for a music class? My left fingers hurt from pressing on the steel guitar strings, I couldn’t change from a G chord to a D chord fast enough, and I’d probably never get “Goodnight Irene” out of my head again.

When class began on Sunday night, our teacher, Rick Taylor, taught us two chords. As we awkwardly strummed, he instructed us to open our books to page 130, to a song that required those same two chords. Most of my classmates had never played a guitar before; we eyed Rick dubiously as he optimistically began to play and sing. Soon he had us bumbling our way through “Hang Down Your Head Tom Dooley,” his enthusiastic singing bolstering our uncertain strumming.

Spurred on by the fact that, each time we returned to our chairs, playing guitar seemed a smidgen easier, I continued to learn chords and songs. Rick’s stories of old-time musicians broke up the practicing into smaller, more manageable chunks. He paused to demonstrate how we could add extra chords or notes to a song, if we were able.

Rick organized a jam session each evening, gathering two of the blacksmiths and some local musicians for an optional hour of playing. Everyone knew Rick was teaching guitar to beginners, and they’d come to jam with us anyway. I found myself singing along confidently, not worrying that someone might be wishing I’d stop.

By Friday morning, the sky had cleared to a cold blue, and my class was suggesting songs to play in the Student Exhibit. As the music class, we’d kick off the ceremony from the stage in the Keith House Community Room. Rick seemed to be employing a mysterious strategy to stop us from becoming nervous about the performance; he wouldn’t let us decide on two songs, and he kept rearranging our seating and having us play songs we knew we wouldn’t pick. As I made my way through the all-too-familiar “Tom Dooley” one last time, I realized I had not noticed the switch to the D chord. My calluses blocked the pain! 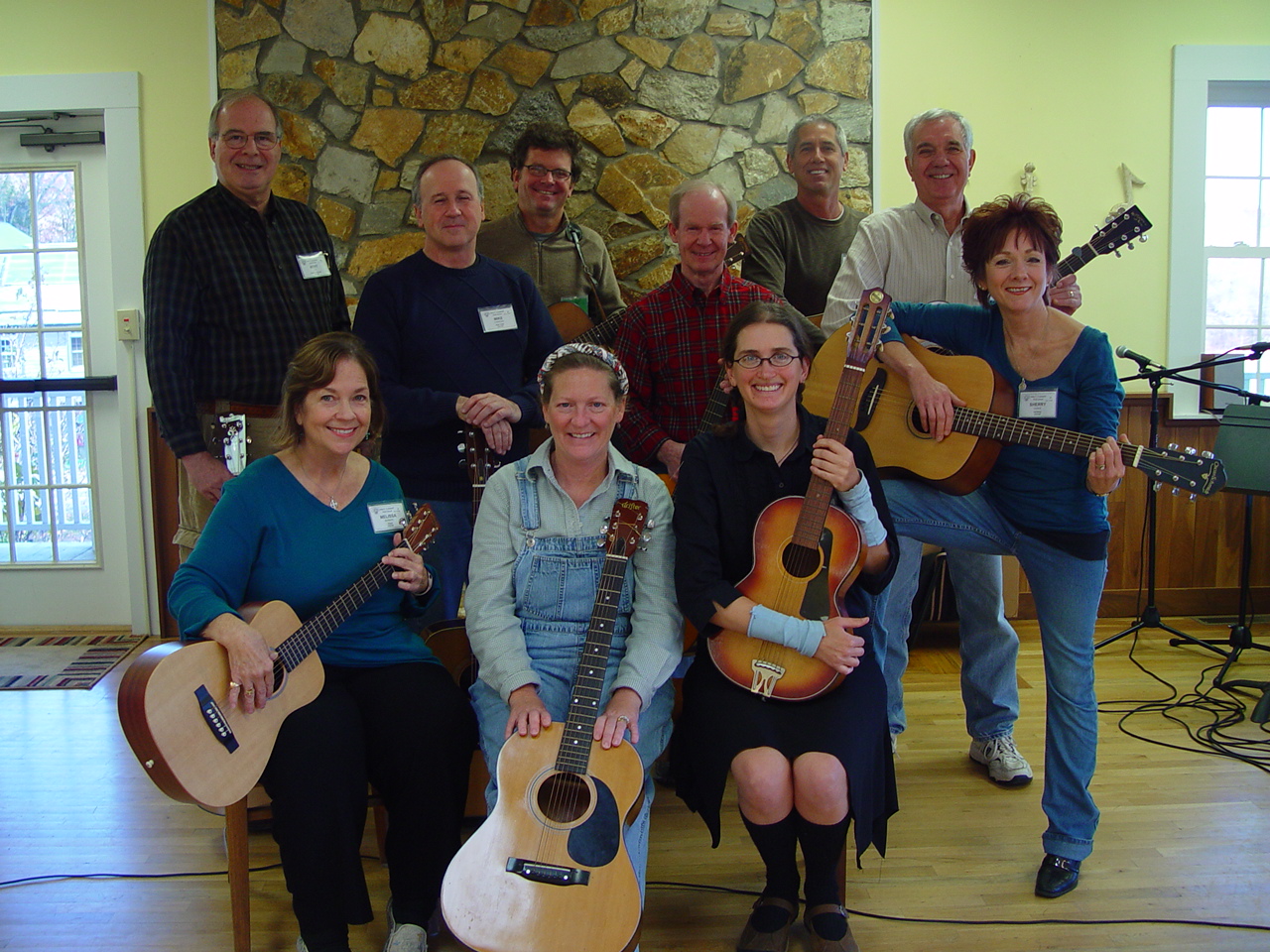 As five o’clock neared, we carried our music stands and guitars over to Keith House and set up on stage. When the crowd took seats, I felt mildly sick as I stared into the sea of smiling faces. The words of the woman at the microphone washed over me as I waited to play. Then she turned to Rick, and I knew the moment had come. He smiled over the two rows of guitar players on stage, and we straightened in our seats, poised to begin. Rick nodded and I began to strum, and the first G chord of “Worried Man Blues” washed my nervousness away. We’d been playing this song all week! The familiar patterns entered my fingers as I made my way through the chorus. By the first verse, I’d remembered to start singing.