You meet the most interesting people here. Over the years, I’ve learned from and enjoyed talking to some of the world’s great characters right here in Brasstown. Shortly after I became the Director of the Folk School, I asked some of my musical and crafts friends to tell me great people we should try to get to teach at the Folk School. A trusted musical advisor, Beth Ross Johnson, said “Get the great ballad singer Norman Kennedy.” My weaving advisor (spouse Nanette) said, “Get the great weaver Norman Kennedy.” These two turned out to be the very same ponytailed Scotsman. So for the last eighteen years or so, he has made visits to Brasstown which are always memorable for us here, jazzing up weavers and spinners, slamming tweed on the table to the beat of the ancient waulking music, where the singing and the weaving come together, as the song propels the cloth sunwise around the table while all the hands of the people lift it up and slam it down and pass it on to the next waulker. In this way, the wool is preshrunk, softened, bonded and unified. The people likewise, except they are not preshrunk. 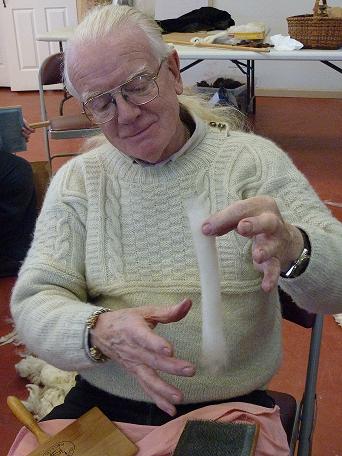 Born in Aberdeen, he was gifted with a lovely singing voice and a prodigious memory. At an early age he began to learn ballads with hundreds if not thousands of verses, in both Scots and Gaelic. He could even sing in English. He even claims to speak it, but sometimes it is hard to tell. Whatever English he is speaking, it’s way down deep within thick layers of Norse and Pict and Braid Scots and the cosmopolitan sounds of a seaport town. Forty years in Vermont have not influenced his accent because the people there do not speak.  Remember what Calvin Coolidge said? Neither do I. He was from Vermont.

Norman can rare back and close his eyes and sing you off to castles, mysterious rides through the wood, long sea voyages, back to the old cattle stealing days, the sailing times, the rhythms of long evenings sitting by the hearth. He can break your heart with songs of lost loves and tragic ends. He can tell you how his sailor father went round the world seven times wi never a passport, and how if somebody told his mither she was getting auld, she’d say, “I’ll knock ye doon and dance on ye!” At an early age, Norman fell in with the Scottish Traveller singers like Jeannie Robertson and Davie Stewart who handed on to him riches of song. This was in days and places where there were not many audio recorders, but fortunately, Norman was there instead. He could listen one time to some ancient song with about 147 verses, and remember the whole thing. He also became fascinated with spinning and weaving, and he sat and spun and sung with old ladies who were the last of their ilk. He has never forgotten a detail of his long life and it has all been profoundly funny, to hear him tell about it. He was taught by great masters and he has become their legacy to us now.

It never works to stereotype Folk School people. Norman can sing the heck out of Patsy Cline’s “Crazy” and he loves Hank Williams. He first came to this country in 1965, to represent Scotland at the Newport Folk Festival. Norman had just finished singing on the famous day when Bob Dylan went electric, to the dismay of his folkie fans. With his typical open-mindedness, (and working-class musical roots which included Scottish country and western bars—think Texas oilfields, only tough) Norman liked Bob’s new sound and thought the audience would come around.

It was great to see him again. He’s still way Scottish, but he’s been a great American singer and craftsman for a long time now. A few years ago, he was presented with the National Heritage Fellowship, our nation’s highest honor for keepers of tradition.