Many Fine Tunes: A Brief History of Dancing at the Folk School 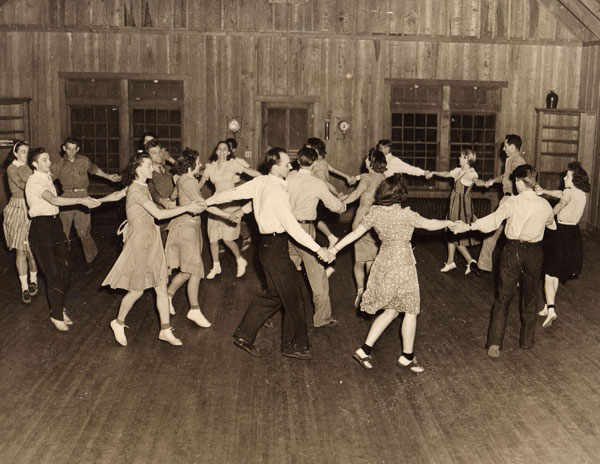 02 Jun Many Fine Tunes: A Brief History of Dancing at the Folk School

Posted at 12:45h in Community, From the Archives, Stories: Dance by Julie Sibley

The stories of our lives where dance and song are called for, go back to faraway lands where kings and villagers alike danced for joy. Dance as a way to express joy that cannot be contained is part of many legends across the globe. I know that you understand what I am talking about. The many threads of our Southern Appalachian story can be seen beginning with the Singing Games or Play Party Games, which are a long time part of a vibrant mountain culture. Almost any occasion where the earliest settlers and pioneers gathered, there was time to sing, clap, laugh, and stomp in time with the music they created. Not too different from what we do now, whenever we are together!

Dancing in the Community Room of Keith House, ca. 1940

Part of our story is about Cecil Sharp, the English collector of Songs and Dances. He had discovered that Country and Morris Dancing were still a very active part of village life in rural places all over England. Around 1914, he arrived in New York City to be the Music and Dance advisor for a production of Midsummer Night’s Dream, which was to be directed by the famous director, Granville Baker. When Olive Campbell met him in Lincoln, Massachusetts, she showed him the considerable collection of ballads she had already recorded in written form. Naturally he was fascinated, and he later made trips to Appalachia to collect more songs and English Dances.

Cecil Sharp visited Olive and John Campbell in Asheville and incorporated the newly collected songs into his first book, which listed Olive as co-author. English Folk Songs of the Southern Appalachians gave songs their historical due. Through his work, many people realized the importance and beauty of these historical tunes. Mr. Sharp’s hostess was Mrs. Helen Storrow. It was her home where Sharp met Olive Campbell. Mrs. Storrow is remembered for giving the land on which Pinewoods Camp in Massachusetts is established. Pinewoods Camp is still a mecca for English, American, and Scottish dancing and Early Music.

The Folk School Begins to Dance

As soon as the last boards were in place in the newly built Community Room on the side of Keith House, and the building dedicated in 1927, Folk School co-founder, Marguerite Butler, initiated dancing. As described in Ellie Wilson’s book, My Journey to Appalachia, the Friday Night Games were a mixture of Scandinavian Folk Dances and English Country Dances. Marguerite told Ellie that the recreation was called ‘games’
instead of ‘dances’ to “avoid any confusion with the activities that accompany drinking.” Marguerite and Olive Campbell had visited Cecil Sharp’s summer school in the South of England in 1923 and had witnessed English Folk Dances there. They decided to teach folk dancing at the school they were planning, “because it preserved the culture of a country.” They surely must have recognized that fun had a lot to do with it!

Georg Bidstrup had arrived in Brasstown in 1926 to lead the school’s farm operation. No doubt part of the reason he was invited was that he was a gymnastics teacher and dance leader as well as farmer. In 1941, which was Ellie Wilson’s first year in Brasstown, the school secretary, Harriet Cornwell, would play popular songs like “Red Sails at Sunset” and also other dance songs on an upright piano next to the fireplace. Georg and Marguerite led the Friday Night Games with her favorite dress-up outfit being a peasant costume. The ‘long ways’ dances were done in two rows with Georg calling out from the floor as he and everyone else danced. Back then, as today, young and old, students, staff, community and visitors who become friends, made up the dancers. Some of the dances involved singing while dancing, like the song, “Merrily We Roll Along.” The tradition was started, which continues today, of ending the dance with everyone present holding hands in a circle and singing the final song, “Good Night to You All.” The beauty in the simplicity of this calls us to remember ourselves as brothers and sisters — one and all: in one land, one home, and one family.

The Spread of Folk Dance

In 1932 the Folk School begun an annual week long Short Course for country dancers and recreation leaders. The creation of this is attributed to Marguerite Butler Bidstrup. In 1935, a young people’s dance weekend became the Mountain Folk Festival, which was held for 75 years at Berea College in Kentucky. Marguerite and Georg were part of the original inspiration for the Christmas Country Dance School, which was also held at Berea College. Another thread of this story began when the Christmas Country Dance Week then became so popular that Berea encouraged other schools to offer a dance week for that same holiday. The Folk School responded by hosting the first Winter Dance Week (between Christmas and the New Year) in 1979. It really all started with the Brasstown Short Course that the popularity of folk dancing spread throughout the region and then – these United States. And so, history was made right out here on our very own dance floor!

The Folk School went through many changes, as did the whole of the United States. From the 1940s through the 1970s there were varying lengths of courses to meet post-war and other directional needs of the times. The Friday Night Games became the Saturday Night Dances. Among the offerings were courses in Dance Band, Vintage Dance, Shape-Note Singing, Recorder Week and English Ritual Dancing among many other things. A garland dance team was formed called the “Rural Felicity Dancers” which still performs very athletic dances. From the local community sprang groups such as the Brasstown Concert Association, the Community Choir, and many others over the years.

Unknown to us at the time, the young man, Bob Dalsemer, had a very fine week at the Berea Christmas Country Dance School in 1969. He set about learning Appalachian Square Dancing. He learned to call from the dance floor while dancing. Bob proved so adept at this that he soon began teaching. He was teaching at Pinewoods Camp and the group he led from the neighborhood Methodist Church Hall, in time, grew into the Baltimore Folk Music Society. In 1970, he visited Brasstown for the first time and stayed for only a few days. While here, he worked with the dairy crew in the barn, which is now the Francis Whitaker Blacksmith Shop. June Dance Week at the time featured a mixture of Appalachian Squares, Contra, and English Country Dance. Bob probably got a chance to waltz around the floor, too!

In 1980, Ester Hyatt, then Director of the Folk School, asked Bob to co-ordinate the second Winter Dance Week in Brasstown. Only two dance weeks a year were offered then with Music, Dance and Nature Weeks offered in the spring and the colorful month of October. This was part of the Elderhostel program. By mid September of 1991, Bob made the move to Brasstown to lead the Music and Dance Program at the Folk School. Through the 1980s the “place to dance in the Southeast” was Brasstown. By the 1990s quite a few other venues had opened up in the region.

Bob had the idea that to stay in tune with the times, a free Friday Night Concert Program would be appreciated. A National Endowment for the Arts Grant was written by David Brose, Folklorist, which covered the honorarium paid to musicians for 2 or 3 years. After that, the Folk School kept hosting this popular, full room event and paid the musicians mostly with the donation basket at the door. The Dog Branch Cats was formed in the early 1990s to be the house band for local dances. Nanette Davidson and Bob were the callers for the band. Bob played fiddle and accordion. Bob created the ever-popular Dance Musicians’ and Dance Callers’ Weeks. I have to tell you that I have seen many who got their start there, who have been calling dances for years – and not just in Brasstown either!

The Folk School is very much still a place where folks enjoy meeting, being, and participating. Saturday night dances remain a popular place for locals and visitors alike. In staying with the tradition of changing with the times, the dance classes offered at the Folk School now focus on dance styles not as easily obtainable in other places. Courses like Irish Step, English Country, Appalachian Clogging and Squares find new enthusiasts all the time. It is almost like a song, and songs still begin and flow through the whole day here. From Morningsong to ‘singing graces’ at meals, and fiddle notes drifting in from windows, you are never far away from a tune…