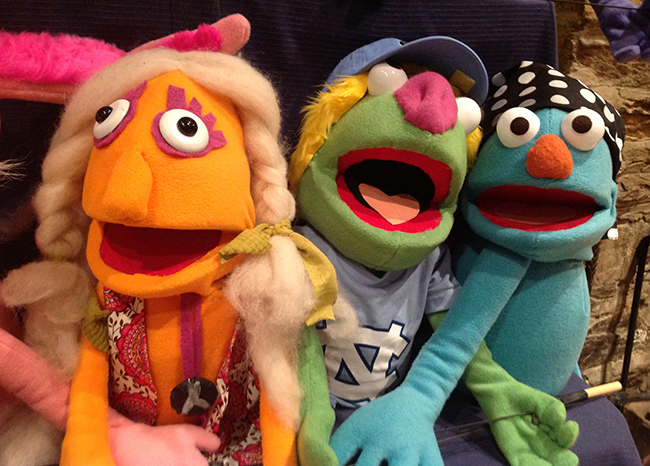 14 Oct Make a Puppet, Make a Pal! with David Stephens

The class display at Show and Tell (2013)[/caption] If you are looking for a unique class at the Folk School that incorporates visual art, mixed media, and performance into a week of puppet fun, check out David Stephens' class Hand-and-Rod Puppet Construction (April 10-16, 2016). When David teaches his class, an infectious feeling of whimsy, fun, and joyful energy permeates the campus. David has been a puppeteer and puppet maker for over 20 years and is founder of All Hands Productions in Atlanta, GA. I sat down with David during his last class here at the Folk School to find out a little more about the magic of puppetry. [caption id="attachment_13855" align="alignright" width="249"] 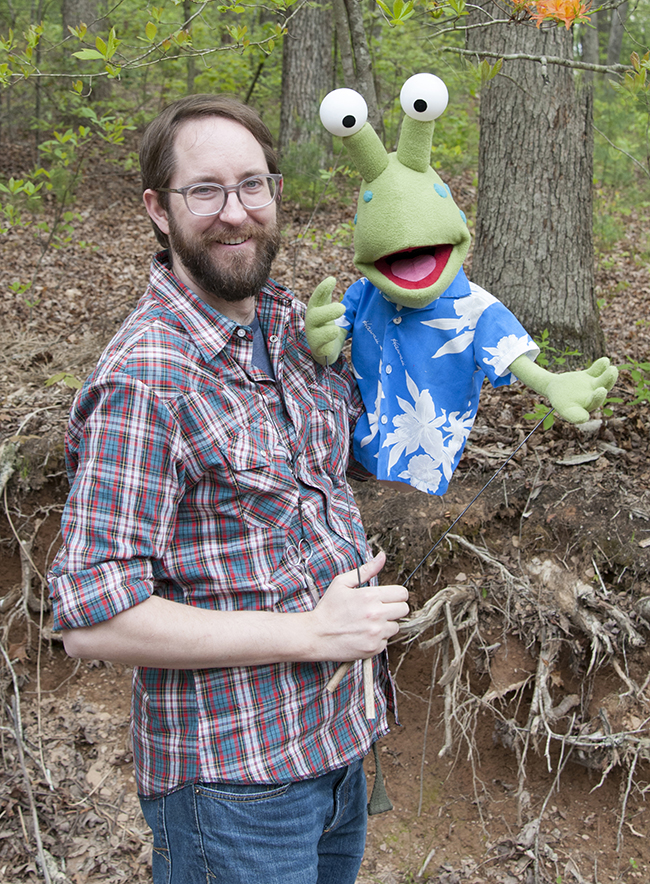 David with his new alien creation[/caption] CP: Is the person who creates the puppet usually the puppeteer? DS: Some people are just builders, and some people are just performers. I do both and I feel like I am a more informed builder, because I am a performer, and vice versa. Understanding the mechanics of how the puppet is made makes me a better performer. Thinking like a performer makes me a better builder, because I know what I want the puppet to be able to do. It can be a symbiotic relationship. I like the visual art aspect just as much as the performance part. Making a puppet from scratch is very gratifying. You take this idea in your head and realize it in three dimensions, which is pretty cool. CP: Describe what a week is like in your Hand-and-Puppet Construction class. DS:  For the first few days, everybody is making the same basic form. By the end of the week, students are creating their own characters, using their imaginations to come up with different facial feature combinations. The personalities of the puppets start to come out later in the week. You see this extreme change in the room from things that look very much the same, to very distinct looking characters. The difference between the puppets that I make and the puppets that these students make is about 20 years of experience. We are all working with the same basic pattern. Experience is the only difference; otherwise we are making the puppets from exactly the same patterns and materials.
Read More